To everyone’s disappointment there were no superheroes at the door. The website had depicted little people in skin-tight leotards waving revelers in, so it was with a degree of sadness we encountered a full-sized gentleman nodding us into the dark entryway. 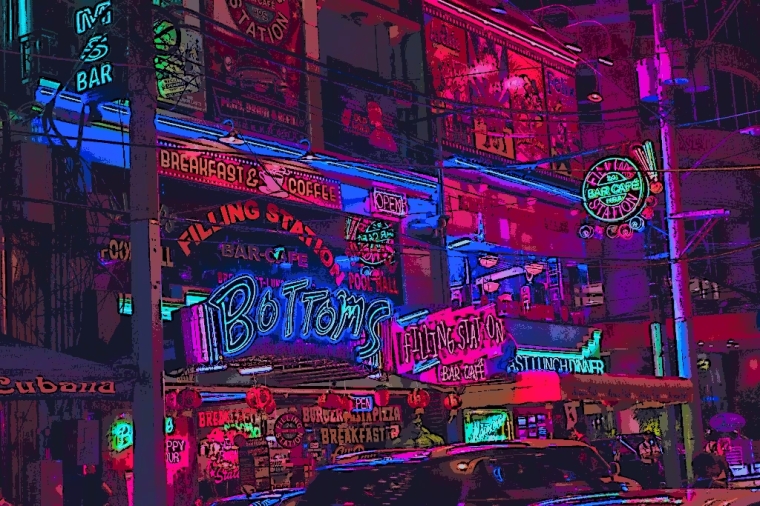 The drunk Aussies said the bar had “midget mud wrestling” and that this was a “must-see” in Manila.

When traveling, nothing makes me cover my wallet and walk in the other direction quicker than the terms “drunk Aussie” or “must see attraction”. Sharing the same sentiment, my travel companion, Professor Roy and I agreed earlier in the evening we would avoid the loosely organized group outing to the tourist trap on Burgos street. But dammit if the poolside San Miguel’s didn’t get their foothold in us and as the clock struck midnight, something akin to a mob mentality erupted in the common area of our guesthouse and swept us all into taxis.

The first thing you notice as you nod your way past the doorman, is, well, the boxing ring — the second is the strippers. Quite a one-two punch. Your instinct is to search for shelter. No one wants to be discovered by mom in the marketing material of a third rate mud wrestling venue in the Far East. But the layout allows no protection from the chaotic cry’s of the emcee, the gratuitous grabs from the bar girls, or the accidental forearm shiver from the Canadian sexpat you’re sharing a table with. “I feel like the liver of Prometheus in here.” Said the Professor.

“It isn’t considered prostitution for these girls to go home with a guy.” The Canadian sexpat explained sagely. Most of our guesthouse had collected at a long chest-high table in the back of the bar. The tables design had the unfortunate effect of forcing interaction with the lone inhabitant who was eager for an audience. “It isn’t like the west. Many of the girls just come for a night or two before their regular paycheck arrives. Helps make ends meet. In Thailand, you can actually pay almost any girl you meet. Trust me on this one. Even once proposed to a sales girl at a Prada bag shop in a fancy mall.” He laughed while maintaining eye contact that was too serious for his laugh. “It just takes learning a few phrases and a loose grasp on your Thai bot. Slip the cash under your pillow before you fall asleep. When you wake up the morning, they’ll both be gone!” He snapped his fingers for effect. “The anti-tooth fairy, eh?!” He exclaimed, as if he’d just stumbled upon something wondrous. “Another strange myth we share with the Americans!” He whooped and elbowed the Professor who was using his one eye that was still functioning to study the chaos in the ring.

“Fairies?” said one of the Aussies, raising his head with considerable effort. “I stick to the lady boys these days as well. At least you can reason with them, hay?”

Chuck Palahniuk says a great story isn’t one that leaves the audience speechless. A good story will stir the listeners to compete to a tell a better version of the same thing. Worried about where this conversational jenga game would take the table, I tried to change the subject. What in the fuck was going on in the boxing ring, I wondered. “Ah you’re curious about the ring are you?!” Replied an aussie, accompanied by a cheshire smile and a nod at his friends.

A few shitty cocktails later, and I was in it. The Aussies were at fault, no surprise there. But the blame-game would do me no good as the Rocky soundtrack pumped from the speakers and a bouncing little dude scowled at me with ill intent. I took stock of the joint in search of an exit.

There was a double row of tables closest to the front where I could see the Aussies celebrating their prank. The Professor stood apart, guzzling down one of the grimy mixed drinks that were the best option on the menu. I motioned him to corner me and just as he obliged the bell rang thrice. Oh shit. What now?  In an instant my opponent was firing away from behind the ref like a thick little woodpecker, I stretched out with one arm and lowered my chin, parrying the blows while also hoping the demonstrated reach advantage might stutter the flurry. It worked. Turning slowly, my shirtless opponent walked right into my jab with an upright neck like a celery stalk. This wobbled him. He studied me carefully, and then charged.

The front-row chairs of the Ringside had jade-green cushions with gargoyles carved into them. The room itself was just one large open space and contained an assortment of odd odors, dominated now by the smell of ammonia coming from the referees gloved hand. As part of the show, he was chasing my opponent around the ring with the famed waking agent. I took the opportunity to hit my distracted adversary with a straight cross that bolted him to the floor. He dropped in a messy thump. “Protect yourself at all times.” I yelled, a little too pleased. He was instantly back up and angrily bobbed under the bright disco lights. Boxing someone half my size reminded me of Adam Lavines sleeve tattoos. More cute than intimidating. My opponent slipped to my left and just as I was feeling confident with my footwork ……..A BELL RANG……A white light shot hard. I took a knee. The little man had decked me in the dick. I waved for my corner man for help and mouthed, “whiskey.”

With enough money and tips, anything can be organized at the Ringside. This went for the guy getting the blow job by the front door and for the match following mine where a British backpacker fought three little people with one arm tied behind his back.

For a different kind of blow, head to the bathroom. Earlier in the evening one of the bargirls asked if I’d like to follow her to the toilet. Without waiting for an answer she grabbed my hand and led me past an elbow-drop off the bottom rope and down a long corridor that went to the bathroom. Just before the door we made a blind right turn that led down a dark hallway as black as satans gooch and equally narrow. The errand culminated with her depositing me in a barber chair. Immediately a half-dozen hands were in my hair along with squeals, hair-spray and a blow dryer. A few minutes later I returned back to my table foggier than after my dance in the ring. “Cool hair” the Professor remarked, casting me a side glance as he winced down a fourth jack and coke. Apparently the famous lady-boy bar next door shared the same bathroom as our establishment. And it happens to include a hair salon.

The boxing match ended as expected. Before I could draw a long breath and let it out, I missed the count. The ref waved it off. It was a quick count no doubt, but I saw good cheer in no longer being part of the spectacle.

Just remember to watch your nuts.

Where: The Ringside Bar, Manila, Philippines.
When to go: From 8pm-4am ten bouts are staged. None of which are PC.
What to order: A hair cut and mixed drinks. No time for beer here. When you enter, the bar is to your left. Do not pass “Go”.

← A Swig of Darkness: Midnight in Iceland
Thank Heaven: Quarantined at the Neighborhood 7-11 →
Join 57 other subscribers

Moaning with Lisa after dashing through Tulsa’s Blue Dome District.
Happy Chinese New Year!
#SecondSons up to no good in Indonesia. Uncharted Dive correspondent Isy is chasing the final act of #eatpraylove when he encounters unexpected gurus challenging his sense of his past.
Bank & Bridge Brewery, next to Mystic Pizza.
Christmas wouldn’t be complete without a couple cocktails at North Pole
Whiskey & #picklebacks