These had all been the drink of choice at one point or another in my years bellied up to mahogany ridge. As I sat down at my bar on the edge of the earth, with the sun easing off its watery ledge, I settled on the Tiger tallboy as my companion. Jimmy Slim had advised me to choose a local brand upon arrival at this remote Thai outpost and stick with it every day. This would help my stomach adapt to the island cuisine and also keep the street dogs from sniffing my crotch. Slim was a travel blogger not a veterinarian, but I still heeded his advice.

My schedule, if you could call it that, revolved around the sunset. Each night, nearing dusk, Chef Rocky would see me approaching from my bungalow down the beach and pull a big bottle from the ice chest. He’d slip on a koozie and have it sweating in front me by the time I sat down and took off my sunglasses. Rocky was the head cook and spoke the best English at the restaurant. Which meant he became something akin to my confessor. He had a knack for quickly remembering customers’ names, a fact made considerably easier because most nights I was the only customer. Not that I was complaining about being alone. I thrive in solitude. I long for solitude. And if I just keep saying this it might actually become true. 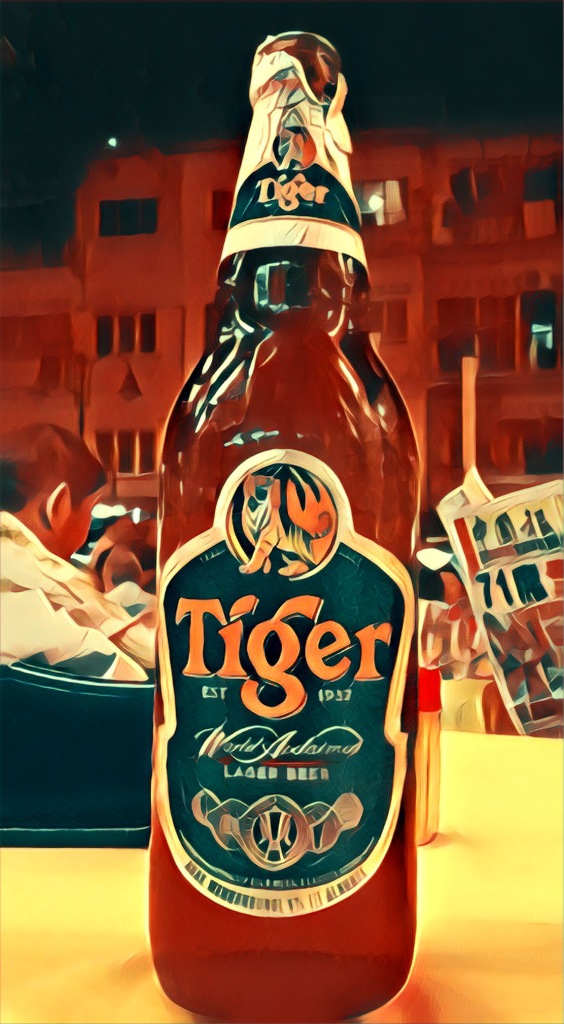 Jimmy Slim always said that finding an undiscovered travel destination is like playing the kids game ‘sardines’. In sardines one youngster runs off and hides in the dark, usually in a big empty building, and then everyone scatters in search of them. If you find them, you shimmy somewhere nearby and join in the silence. Eventually more and more seekers collect. Similarly when traveling, there is a lot of trial and error in the search for paradise, and when you stumble on the right spot, you don’t announce it to the world, instead like sardines, you hit the dimmer switch. You batten down the hatches. If too many arrive the jigs up.
And pretty soon the travel bloggers arrive.

This island was a long way from being a can full of sardines, I thought to myself, as I revved my motorbike past a plantation of young cashew trees. The vanishing late afternoon sunlight came in flashes where it wasn’t hidden by wood. The first pin-pricks of rain stung my bare arms as I serpentined my way through the boggy air and refracted light. I’d been there for enough weeks I could feel the island breathe. I could sense the rain coming 20 minutes before it arrived, which was the exact amount of time it took me to ride from my bird watching perch to Rocky’s.

Back at Rocky’s, having beaten the hard rain by a nose hair, the rumbles from the first stanza of the storm cleared its throat. “I went to the muay thai gym again to see if I could work out.” I complained to Rocky as I scanned the menu. “You know, the one with the ring surrounded by palm trees that looks straight from Mortal Kombat?” Rocky nodded, pretending to understand the pop culture reference.

“It was the third time I stopped by. I asked the guys there if I could work out on the heavy bags, and you know what they told me? They said ‘next week’. Third week in a row they’ve told me this.”

“Next week, yes.” Rocky nodded in agreement with their timetable.

I rattled the remaining ice around my water glass like yahtzee dice.

“No one’s here, Rocky…………” I let the question hang in the air. The kaboom of thunder colliding like a bass drum from Jesus.  Surely it had to be the Lord up there. Providing color commentary. Twirling his drum sticks from behind the red rimmed cumulus clouds rising unevenly like oven bread.

“Maybe next week, my friend. You want party?”

I took a minute to consider this while looking at the sunset merging with the thunderstorm over the Andaman Sea.

“Well, I’m not here to party. But are there……..” I wasn’t sure what my question was. ………”people somewhere?” My feet shifted in the sand cooled from the shade of the table.

Rocky thought I was being coy. He leaned in closer. “You want mariwhana?”

I laughed, but not too hard. I didn’t want to offend him. Some parts of the world still speak of the reefer like Nancy Reagan’s in the room. I wanted Rocky to invite me along if there were kava shells to drink or some kind of native fungus that arrived after rains and brings you to the Elysium in your brain. The kinds of substances they consider with the same nonchalance we do pot.

I shrugged. “Mary-Wana is just not really what I’m after.”

Rocky thought for a minute. His head stopped nodding as he arrived at a solution.

“If you want marihwanna you should go to the Booty Bar. It’s on Buffalo Bay.”

Then Rocky leaned back in his chair as he remembered the problem with his recommendation.

“The best sunsets are on Buffalo Bay.” Confirmed my friend  and semi-professional travel adviser Jimmy Slim over Skype chat that evening.

While Slim occasionally had outdated intelligence, the dude knew his sunsets. I read Slims message about Buffalo Bay skeptically. “There will be yachts out there,” he continued in the chat window. “And one of the coolest bars you’ve ever seen called the Booty Bar. It’s really a trip, man, it looks like a marooned pirate ship.”

Yachts? On Sardine Island? I couldn’t fathom it.

Intrigued enough not to day-drink, I drove my scooter to Buffalo Bay sober as a judge and an hour before sunset prepared for a scene from the French Riviera. The island’s narrow roads were unsubtle reminders of the island’s ban on large motorized vehicles. As I shakily pushed my mopeds kickstand into soft dirt to park, I considered for the first time there might be one benefit to the occasional two-ton pickup. I imagined that 3 foot monitor lizard wouldn’t still be stink-eyeing me from the middle of the road if there were heavy metal around to have kept one of his ancestors honest. The lizard and I had just concluded a high-stakes game of chicken. I performed my end of the action on my scooter with both feet frantically pulled up to my chest as the brawny bastard flexed in the middle of the path licking the sky with his tongue. He was unfazed by the 300 pounds of rapidly approaching modernity that swerved into the jungle when he wouldn’t budge.

I hung my helmet from the handlebars and left the bike in what was either a parking lot or somebody’s cucumber garden. The problem with an empty island is the vague feeling of perpetual trespassing. I made my way past a handful of crescent beaked hornbills flash dancing in the trees above the restaurant, and kicked off my sandals to prepare for the beach. The horizon had wrapped the bay in its fiercest pre-dusk robes and sure enough, there bobbing before me I spotted an immense……….. single, solitary dingy.

“Yachts” I said to myself aloud with a laugh.

“Come on up man, you want some weed?” I’d walked down to the far south end of the bay where a structure appeared. Booty’s Bar was one part Robinson Crusoe and two parts building inspector pulmonary. The ship looked like a mangrove forest that had been twisted into a barb and dumped on the shore. This was the spot alright. I looked at my phone and panicked. It was almost 5pm. This was longest I’d delayed my first drink of the day. On islands, drinking isn’t an escape, it’s a lifeline to tether you back to reality. Being buzzed is the one feeling that stays the same. It is the window into clear thinking, and what keeps you from cashing out your 401k and never leaving.

MGD (in a bottle)

At the Booty Bar it was Chang beer. And I always brought my own.

I approached the port side of the bar that was shaped into a hull constructed completely from fabricated driftwood. I peered through the grey jaw bones to try and get a sight line on the Cannabis Captain. Eventually I spotted him balancing barefoot three stories up between two crows nests. He momentarily stopped hammering. “Come on up bro!” he urged again. I passed rows of barracuda teeth and looked for something that was in the same species as stairs. I found a rope ladder and was glad to recall I’d had my tetanus booster.

“I was sent here by Chef Rocky. I come from The Long Beach” I announced, squinting in the sun that was now eye level. These were only lines I’d rehearsed and I realized that I sounded like a Spanish settler. “Rocky told me to drink whatever you say.”  I continued, smiling broadly in case there was a happy hour.

The Captain met my smile, took a pull from his joint and shook his head.

“Sorry bro, we open next week.”

WHERE: Rocky’s. Depending on the week.
WHEN TO GO: Sunset.
WHAT TO ORDER: Anything with cashews, they grow on the island and are some of the best in the world. Beware Rocky’s food recommendations though. He pushes what he wants to experiment with. As for beer, unless you’re a slow drinker, always go “Big” when asked.

← Teach a Man to Fish (or “Unclaimed Baggage at MKE”)
Dives of Christmas Past: Showdown at the Jolly Roger →

Moaning with Lisa after dashing through Tulsa’s Blue Dome District.
Happy Chinese New Year!
#SecondSons up to no good in Indonesia. Uncharted Dive correspondent Isy is chasing the final act of #eatpraylove when he encounters unexpected gurus challenging his sense of his past.
Bank & Bridge Brewery, next to Mystic Pizza.
Christmas wouldn’t be complete without a couple cocktails at North Pole
Whiskey & #picklebacks